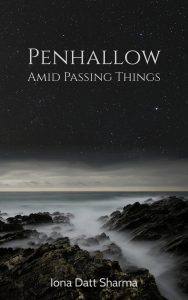 Magic, in common with all things, is passing from this world. In a coastal village in eighteenth-century Cornwall, Penhallow – an honourable smuggler — has more pressing problems. One of her boys has just been hauled up before the magistrates. A mysterious King’s messenger has arrived from London. Something nasty – and possibly magical — is afoot in the smugglers’ caves beneath the water.

And then there’s Trevelyan, the town’s austere, beautiful Revenue officer…

Pen and Trevelyan originally appeared as part of The Underwater Ballroom Society, an anthology of speculative fiction edited by Stephanie Burgis and Tiffany Trent. Here’s some of the things people have said about this story:

“An author to watch: Iona Datt Sharma’s Penhallow Amid Passing Things skilfully builds a strange magical Cornwall with a lovely understated f/f Revenue/smuggler romance that I wanted a lot more of.” – K.J. Charles, author of A Charm of Magpies

“What’s not to like about a genderbent tale about  age-old rivalry between smugglers and Revenue inspectors, with magic thrown in for good measure?” — Bookdaze