Five years ago I wrote about the Lee family of photographers, and foolishly used the phrase “over the next few posts”. Ha. One change of job, one house move, and one pandemic later, I’ve finally found the time to start putting it together…

Robert Lee (the elder) was born in Antrim circa 1840. He married at Ballycastle in 1859, and emigrated to Lancashire, where he lived in Barrow until at least 1875, working as a joiner. In 1881 his wife Margaret was keeping a boarding house in Blackpool along with their two younger children, but he had disappeared from the census and, presumably, returned to Ireland.

He had started working as a photographer by at least 1884, when he is known to have been at Harbour Terrace in Portrush (and renting out a house in Ballycastle); shortly afterwards he moved to Causeway View, and produced photographs with a backing along these lines. The “Art Studio” name was used sometimes, but not always.

The name “Causeway View” continues in directories until around 1901, but the studio seemed to bill itself as Lansdowne Crescent or Lansdowne from 1890 onwards – see below. 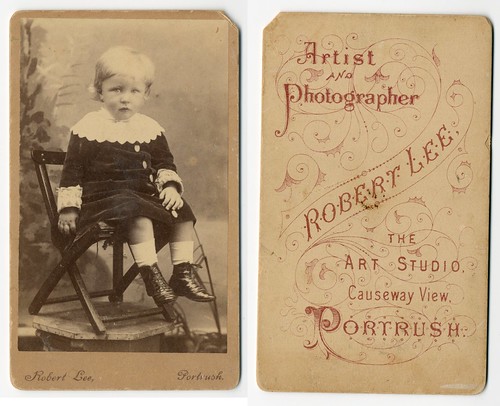 By 1887, Robert had opened a studio at the Giant’s Causeway, though he may have been operating there earlier; there are some photographs of groups at the Causeway which use backings as above, without mentioning the studio. However, he soon shifted to labelling them “Portrush and Giant’s Causeway“, as below. 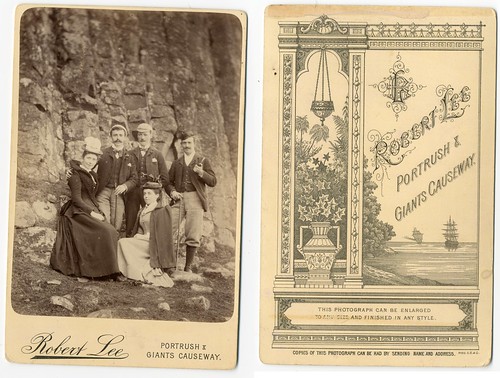 Around 1890, he took his sons Robert (born c.1863) and Alexander (born c.1869) into the business, meaning that cards are often marked “Lee & Son” or just generically “Lee”, and began to focus his own attentions on developing hotels. The studio at the Giant’s Causeway was primarily operated by the younger son, Alexander, and was leased until 1896. His daughter Henrietta (born c. 1862) may also have entered the business around this point.

The Portrush studio was still at Causeway View until it was destroyed by a storm in 1888, and then rebuilt as the “Tower House“, adjacent to Lee’s other business, the (temperance) Lansdowne Hotel; both opened around 1890. The rebuilt Causeway View studio became known as the Lansdowne Studio, sometimes just Lansdowne.

In the late 1890s, following the death of his wife in 1894, Robert Lee (the younger) moved to South Africa and established a business there, in the Electric Studio, 54 Plein Street, Cape Town. Cards from this period (from both ends of the world) often state “Portrush and Cape Town”, possibly with the Giant’s Causeway or Coleraine added as well. At some point his brother Alexander moved out as well; they continued in business for several years (and presumably through the Boer War) before returning by 1907/08, apparently after Alexander fell ill. The brothers married (in Robert’s case, remarried) and settled back in Portrush, where Robert ran the studio at Lansdowne Crescent, and Alexander established a studio at Bath Street. The two brothers continued in business, along with their sister & brother-in-law in Main Street, despite a major falling out in 1914.

Robert Lee built a terrace of houses on Railway Road, Coleraine, in 1897, one of which was opened as a studio in 1898. The properties were inherited by his son Alexander in 1901. The studio may not have been operated by a member of the family – advertisements suggest it was subcontracting to other photographers. Alexander Lee retained property here at least into the 1930s and the studio is last found in directories in 1913.

This studio was in use from at least 1910 to 1925. It was the studio of Alexander Lee, and presumably was only opened after he returned from South Africa (circa 1907-8?). It may also have used the name “Bath Cottage”. Some photographs were taken of groups at the Giant’s Causeway and printed under this label, but there may not have been a studio there. Alexander did not pass the business on, and it closed at some point in his later years; he and his wife also ran a boarding house at the adjacent Leander House on Bath Street. 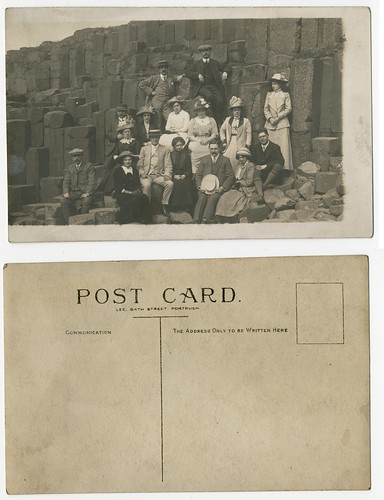 This name was used for the studio which succeeded Causeway View, on Lansdowne Crescent. It was in use from around 1890 onwards. Until 1901 it was operated by Robert Lee the elder, then inherited by his son Robert along with the adjoining Lansdowne House Hotel. The studio stopped being used at some point in the 1910s, and was itself leased out as a hotel (“Tower House”); this was operating as a hotel in 1915 and 1917, suggesting the studio had stopped operating by this point. Robert Lee then moved the family and the business to Main Street (below).

The house and studio at 2 Main Street was built by Robert Lee probably in the late 1890s; it is not clear when it was put to use as a studio, but an advertisement in 1899 is looking for a shop assistant with experience in “fancy goods”. A contemporary image suggests that it sold a large amount of tourist souvenirs whilst also operating as a studio.

The property was inherited by his daughter Henrietta Leech in 1901, and in 1901 she and her husband were shown as occupying it and working as photographers. It continued to be occupied by her until it was sold to her brother Robert, who took over business there; this was by circa 1920. (Her husband had died in 1916 and her younger son, who had been expected to inherit he business, in 1917).

The name “L’Atelier” is identified as early as 1909, but it is not clear exactly when it started being used – probably after 1905. This studio was the last part of the business to work as a photography studio, and the name was retained right through to the 1970s. 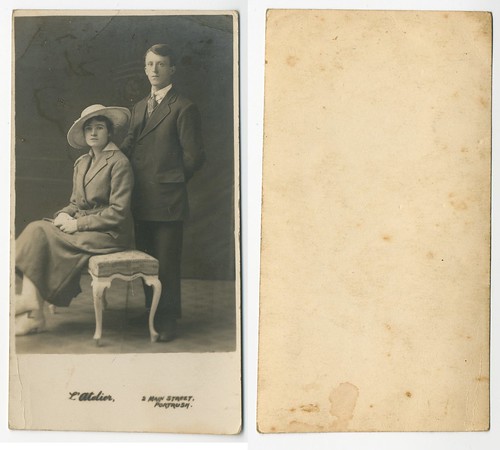 Very little is known about this studio – “Messrs. Lee of Portrush” took over a studio here in 1925, and were still operating it by Christmas 1927. The “Messrs” is slightly odd given that the two brothers had seemingly fallen out by this point, so it is not clear if they were working together. The card below suggests it was run from Alexander Lee’s side, however. 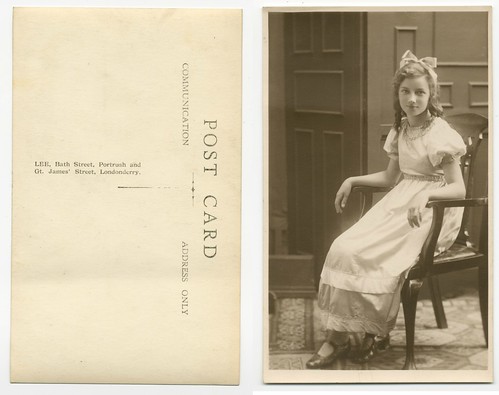 Any comments below will be replied to by email if possible! I am always delighted to see new photographs from the Lees, and will see what I can do to help you date them. Please do get in touch.

One thought on “Lee of Portrush: a timeline”