A little while ago, I ran across the intriguing “Industrial Library”, a series of small cheap hardback volumes (priced between a shilling and half-a-crown) published intermittently between the 1830s and 1880s. Each volume focused on a particular trade, generally giving a mixture of an outline of what the work might involve, some inevitable moralising about the need for good work ethic and religious devotion, and practical advice.

As a result, some of them are amazing fragments of social history – the “Housemaid” volume, for example, gives a detailed description of the daily routine of a servant in a moderately sized household, and just what some mundane tasks like cleaning candle-sticks might actually entail. (The didacticism is helpfully provided by an unexpected page explaining why servant girls really shouldn’t be spending their money on unwarranted luxuries like tea.)

A few of them are a bit differently oriented – the “Confectioner” volume, for example, is mostly a set of recipes and processes. (How to make chocolate starting from a bag of ripe cocoa beans – no problem, pages 35-37, make sure to have a roasting pot and an iron mortar and pestle handy. And if you need somewhere to store it afterwards, the later editions tell you how to build an ice-house.)

After a bit of digging, it seems the series was first produced in 1838 onwards (or so), as the “Guide to Service” and “Guide to Trade” series (collectively described as the “Industrial Series”, though this name was not on the volumes). This work was done under the auspices of the Poor Law Commissioners, who apparently wanted to help train children, particularly in workhouses, into various useful occupations. The series was published by Charles Knight – the publisher behind the Penny Magazine and Penny Cyclopedia, and a collaborator of the Society for the Diffusion of Useful Knowledge, so very much the sort of publisher keen on cheap-but-useful publications for a working-class audience.

I am not completely sure how many volumes were in these initial series, but I suspect most of the ones that we see later were initially published here. There is at least one volume (“The Farmer“, ed. George Nicholls, 1844) that fits the pattern of the “Industrial Series”, but does not reappear in the later issues and does not have a “Guide to Trade” label. An early advertisment for the series (published at the end of another Knight book, 1838) identified 31 volumes for “service” and 56 or 59 for “trade”, and anticipated publishing one of each per month, though there is a good chance not all of them were ever published, and a few (such as “Banker’s clerk” or “Governess”) were not mentioned here, but did in the end go on to be published in the first series.

Most volumes were unsigned, but we know some of the authors to be interesting figures. Knight himself wrote the “Publisher” volume, and his frequent collaborator, the writer and social theorist Harriet Martineau, wrote the “Dressmaker”, “Housemaid”, “Lady’s maid”, and “Maid of all work” volumes. James Devlin, who wrote the two “Shoemaker” volumes (the original edition, at least, seems to have been long enough to require two parts) later seems to have been influential in the early shoemakers unions and a prominent Chartist organiser, and wrapping up the set, Sir George Stephen, a prominent abolitionist, wrote the “Clerk”, “Governess”, and “Groom” volumes. An intriguing cross-section of early Victorian left-wing intellectuals.

Circa 1849, (some of?) these volumes were reissued by Houlston & Stoneman under the label of the “Industrial Library”, which seems to have been used on the covers and in advertising, but not the title pages. (It is possible that some of the Houlston volumes were new and not from the Knight series; I haven’t traced all of them yet. Intriguingly they seem to have used the same printer.)

They were all reissued in c. 1862-65 by Houlston & Wright, now as a coherent set with a series index listing 34 numbered volumes of the “Industrial Library”, priced between 1s and 2s6d (a bit less than the previous Houlston series). With the possible exception of “The Farmer” (noted above), all the volumes from the Knight series seem to reappear here.

Finally, in 1877-78, the entire series was reissued, again under the “Industrial Library” banner, by Houlston and Sons. These had a series device on the titlepage, and an appropriate quotation from Ecclesiastes (“Whatsoever thy hand findeth to do, do it with thy might”. Hard to argue.) They were also published with nice embossed “Industrial Library” covers, a little gilding on the title, and end-papers advertising other useful and improving Houlston titles. 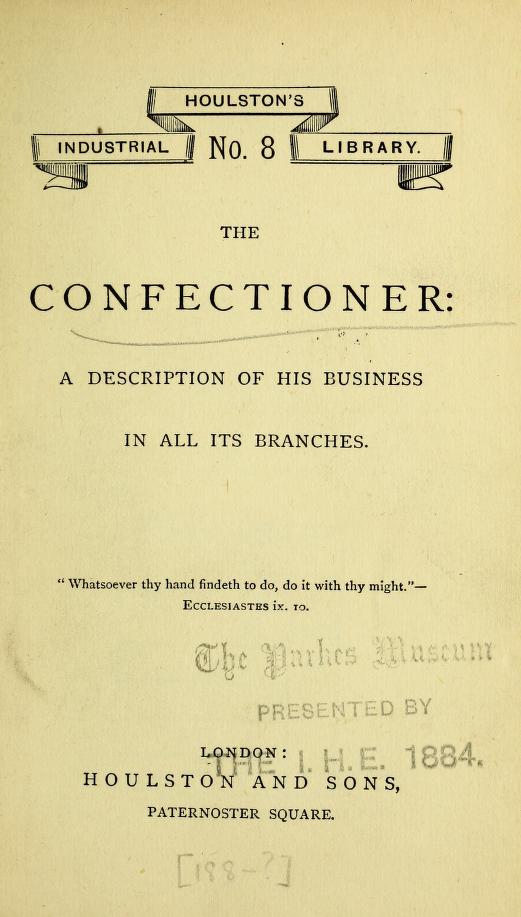 (It is possible that some individual volumes were reissued independently of these series; the “Banker’s clerk” volume in the 1870s series is described as a fifth edition, not a fourth. This volume is also the only one I have definitely identified being republished by Houlston after the 1870s or early 1880s; there seems to have been a seventh edition in 1891.)

The fourth series, the 1870s publications, also had some slight tweaks to the line-up. One volume was removed outright – No. 28, “Ploughman”, was dropped and replaced with a new (out-of-sequence) No. 28, “Draper and haberdasher”, which probably says something interesting about what was seen to be important in the modern commercial world. No. 30 was also tweaked to be “Poultry keeper”, not “Poultry maid”, an unexpected moment of occupational gender-neutrality.

And thanks to the wonders of mass digitisation, of course, we can now read them. I think that 14 of the 35 total (34 plus one extra in 1878) have freely-available online editions; another three are available through Gale; and five are on HathiTrust or Google Books but currently unavailable due to presumed copyrights. That leaves us with 22 of 35 digitised in some form or another, which for something quite ephemeral like this is not bad at all.

In order, the currently available volumes are (updated!):