One of the most striking developments in the last ten years of scholarly publishing, outside of course open access, was the rise of the “megajournal” – an online-only journal with a very broad remit, no arbitrary size limits, and a low threshold for inclusion.

For many years, the megajournal was more or less synonymous with PLOS One, which peaked in 2013-14 with around 32,000 papers per year, an unprecedented number. The journal began to falter a little in early 2014, and showed a substantial decline in 2015, dropping to a mere (!) 26,000 papers.

One commentator highlighted a point I found very interesting: while PLOS One was shrinking, other megajournals were taking up the slack. The two highlighted here were Scientific Reports (Nature) and RSC Advances (Royal Society of Chemistry) – no others have grown to quite the same extent.

We’re now a month into 2016, and it looks like this trend has continued – and much more dramatically than I expected. Here’s the relative article numbers for the first five weeks of 2016, measured through three different sources – the journals own sites; Scopus; and Web of Science. 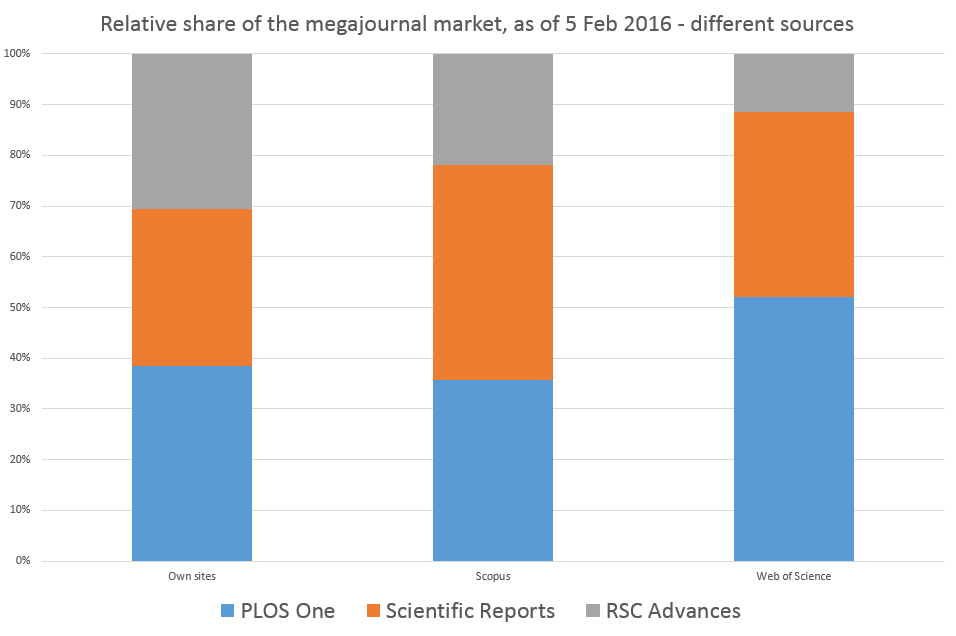 The journal sites are probably the most accurate measure for what’s been published as of today, and unsurprisingly has the largest number of papers (5965 total). Here we see three similar groups – PLOS One 38%, Scientific Reports 31%, and RSC Advances 31%. (The RSC Advances figure has been adjusted to remove about 450 “accepted manuscripts” nominally dated 2016 – while publicly available, these are simply posted earlier in the process than the other journals would do, and so including them would give an inflated estimate of the numbers actually being published)

Scopus and Web of Science return smaller numbers (2766 and 3499 papers respectively) and show quite divergent patterns – PLOS One is on 36% in Scopus and 52% in Web of Science, with Scientific Reports on 42% and 37%, and RSC Advances on 22% and 11%. It’s not much of a surprise that the major databases are relatively slow to update, though it’s interesting to see that they update different journals at different rates. Scopus is the only one of the three sources to suggest that PLOS One is no longer the largest journal – but for how long?

Whichever source we use, it seems clear that PLOS One is now no longer massively dominant. There’s nothing wrong with that, of course – in many ways, having two or three competing but comparable large megajournals will be a much better situation than simply having one. And I won’t try and speculate on the reasons (changing impact factor? APC cost? Turnaround time? Shifting fashions?)

2 thoughts on “Shifting of the megajournal market”