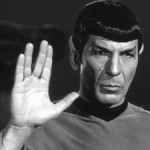 As you must know, Leonard Nimoy died last week at the age of 83, after a short illness. Though he had a career which featured everything and the kitchen sink, he was Spock, of course. With many others, I’m on Strange Horizons this week, talking about what he meant to me: Nimoy and Spock: Reflections and Farewells.

So if you have the misfortune of following me on Twitter you may know I am having a Star Trek renaissance. This happens every couple of years and mostly goes like this: show! Feelings! Oh show! Oh feelings! This time around I am having love for TNG, which is odd – I’ve never liked it as much as DS9 – but interesting, and having thoroughly abused the 140-character format I think I would like to be verbose as to why.

So I am for the most part not really interested in generalised discussions of race on Star Trek? I mean, spoilers, Trek isn’t very good on race! Most of the time – but what it is great at is ideas. And nothing mainstream, for me, has ever done anything like it on cultural assimilation. There’s this one episode of Voyager that gets this really well and I’ve always thought is underrated. In “Lineage”, pretty late on in the run, B’Elanna finds out she’s pregnant and it’s basically adorable.

Gossip travels at warp ten, everyone on the crew wants to be the baby’s godparent and/or namesake, and Tom realises the only person on the entire ship he knows who’s a father is Tuvok (!) and they have a sweet and genuinely poignant awkward conversation in a Jefferies tube. (Every time Star Trek does this conversation it’s amazing. Dax advising Sisko on fatherhood! O’Brien advising Worf on marriage! ….anyway.) So B’Elanna finds out that her baby, who will be one quarter Klingon to three quarters human, will nevertheless look Klingon because Klingon traits are dominant. And through a series of fights with Tom, fights with Janeway, and, eventually, an incredibly unethical application of her engineering ability to the Doctor’s programming, B’Elanna persuades him to alter the baby’s genetic make-up in utero so she’ll look human. Roxann Dawson, who plays B’Elanna, is Latina; Robert Duncan McNeill is white. A baby who looks more like him will look… oh, you get it. And I just cry and cry at it, because whether or not you agree with it, she’s making what she thinks is the best choice for her baby. Tom tries telling her that there are Vulcans on board, Talaxians, Bajorans – and B’Elanna turns around and snaps, “And one hundred and forty humans!”

And of course he tries to argue and she tells him he doesn’t understand: “When the people around you are all one way and you’re not, you can’t help feeling like there’s something wrong with you” – and I cry.

And it’s not just about race, of course, but culture; not just how you look, though of course that matters, but what you are. (B’Elanna’s Klingon fighting instincts! How hard her human father found her to live with!) And how else can you articulate that? That feeling of being four or sixteen or twenty-seven, and you’re in someone’s house or at a party or at your desk surrounded by your colleagues, and someone says something and you’re just – at the precipice of your lack of understanding. When the people around you are all one way, and you’re not.

And it’s kind of odd and counter-intuitive, but this time around I’ve realised the application of this same narrative to, of all people, Data. Not all the time: I think the show sometimes misfires on this, and sometimes does it really well – it seems to depend on the particular episode and set of writers? But, okay, so: Data is an android, and because this is Star Trek, operations officer on the Enterprise.  I adore Data and always have – I was saying to someone recently that my Star Trek feelings are getting on for twenty years’ standing, owwww – and I’ve always mostly thought that I love Data and Spock for the same reasons. In different ways, they both serve as a moral compass for their respective captains. I mean, with Spock it’s usually an outright, Jim, don’t do this, this is a terrible no-good idea, and with Data it’s more often from the mouths of babes, truth – but I love that. (And, the other side of the trope which I also love: the few occasions when it’s reversed. When it’s Kirk reining in Spock from murdering Stonn, or from complicity in horrors in “Mirror, Mirror”; when Picard tries to pull Data back from the brink with Lore – I love that narrative arc.)

But… okay, with Data. In “The Measure of a Man”, which by the way is my favourite courtroom drama ever and probably one of my favourite episodes of anything, some dude shows up and gives Data transfer orders: he’s being sent to the lab to be dismantled so they can figure out how to make more of him. Data’s answer is, huh, what if you can’t put me back together again? Rather than do this, I will resign – and then they tell him, you can’t resign, you’re property of Starfleet. And Picard is forced to argue in court for the position that Data has rights over his own body. It’s a story about humanity, and sentience, and life. It’s a story about transformation. And it’s a story that allows Guinan to say this to Picard, when no one else will (for those playing along at home: Guinan is the Enterprise’s venerable bartender, played by Whoopi Goldberg): “Consider that in the history of many worlds there have always been disposable creatures.”

That gives me chills. That if Data is property, then property obscures sin. In the history of many worlds, there have been those whose bodies were marked. I’m sorry, Riker whispers into Data’s ear, and reaches in to remove his hand.

And then, the ruling, when it comes, is very narrow. It is not that Data is human, or even sentient, or that he has a soul; it is that he might, as we all might, and that while he occupies his own body, he has the right to discover that in his own time. I think that not only is it excellent TV, it’s excellent jurisprudence. Picard notes that the fact Data was created doesn’t mean he’s not a person; children are all created by their parents – and what is established here is that he is, at least, a potential person. It doesn’t say anything about humanity.

But after that, they do lots of episodes where Data wants to be human? Which I’ve been thinking, misses the point that that episode makes so succinctly. Sometimes it’s understandable – at one point Data tells Geordi that he’s afraid of outliving everyone he’s ever known – and sometimes less so. Spock, of all people, tells him: “There are Vulcans who aspire all their lives to achieve what you’ve been given by design.” And Data can’t defend why he would rather be human, though he does point out that it’s a choice – like Spock’s choice to be Vulcan through and through, despite his human mother. Spock’s father, Sarek, made that choice for him when he was young; and that choice and what follows from it are arguably the first story Star Trek ever tells.

So I’ve found myself thinking, isn’t that kind of… colonialist, if that’s even the word? Data wanting to be a person is a very different thing from his wanting to be human, especially if the narrative embraces the latter as though it were unproblematic. And the show gestures at this distinction quite a lot without ever quite making it: Picard comments at one stage that Data might be a culture of one, but it’s no less valid than a culture of billions; when he’s dying, Noonien Soong tells Data that he will grieve, “in your own way”; and there’s also the spot-on sweetness of the way the show never questions Data’s right to refer to his two human creators as his parents. His mother describes him as “the child of two people who loved him and each other” – which is lovely, but they never take the additional leap and say, Data’s is a form of human life. If that has value, then why should he aspire to a different kind?

But then – here it is. Data, who is different from everyone else around him, even more so than half-human half-Klingon B’Elanna and half-human half-Vulcan Spock – and there’s nothing wrong with him, but, well. Well, wouldn’t you wish to be white? You would lose what you were, but without your soul in doubt. What it is, is this: Data doesn’t want to be human, he wants to be normal, unmarked. Like B’Elanna wants for her daughter; like Sarek wanted for Spock. What gives me the feelings is that the show for all its failings, engages with that desire so closely and gives it to these characters who are gifted and loved and flawed, and gives them the consequences of that desire, Data’s loss and B’Elanna’s desperation and Sarek and Spock not talking to each other for thirty years, because it’s okay to want to assimilate into the majority culture; to not just be yourself. It’s okay to wish for whiteness; it’s saying, sometimes, not all the time, we all do. 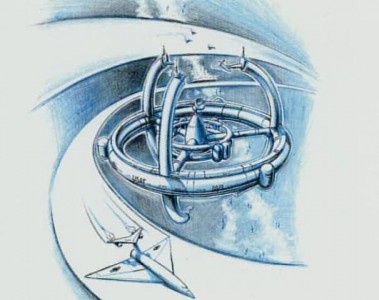 I have a post up at the Lashings of Ginger Beer blog today, on space stations, science fiction, and the politics of community. I could write a thesis on this topic, I think: on why we have science fiction, what it is for, and why, like me and real life, it really doesn’t have to be serious business all the time.

(Image from sketch drawn by John Eaves, via memory alpha.)