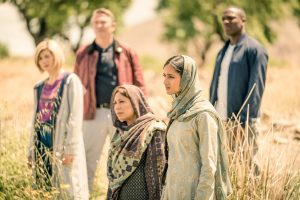 To start with, here is a joke my father told me a couple of weeks ago. It’s about a man who’s getting to his middle age and starting to feel out of breath when he climbs stairs. His doctor says, look, man, you should get moving. Go for a mile’s walk every day, and when you can, try running. The man takes this to heart and after a couple of months, gives his doctor a ring. “Doctor-sahib,” he says, “please help me.”

“Well, sahib,” the man says. “I did what you said! I ran a mile every evening and I feel much better! Only, I’ve hit the Indo-Pak border. Do you think I should go on?”

The point of this is to say: the border comes up in our dad jokes.

Another story: my grandfather was born in what is now the province of Sylhet, in modern-day Bangladesh. He attended the government school in the village. His family owned land. On the night of Partition he and his family picked up anything precious they could carry and crossed the new border at the River Kushiara. He didn’t return to that place for sixty-three years.

That was the sixteenth of August, 1947. The Doctor and companions arrive in Punjab on the seventeenth of August, 1947. As ever, they’re not supposed to be there; they meant to land in Lahore in the 1950s. Still, Yaz wanted to meet her nanni as a young woman, and here she is, Yaz’s nanni, Umbreen: on a farm in rural Punjab, close to the border. Tomorrow, Umbreen will marry Prem, her friend and neighbour — a handsome, charming Hindu, in crisp kurta pyjama – and the visitors have arrived just in time for the wedding. We, of course, know that Partition is on the way: in some places, it’s already happened. Mass communal violence, in the cities and the countryside and along the length of the new border, is about to erupt.

But not yet. Not yet. In the meantime there’s a wedding, and in the meantime everything is beautiful. Let me take a moment to talk about that. The landscape is gorgeously rendered; the light has the sepia-gold look of pre-independence photographs. The music is breathtaking, luscious. In classic Doctor Who tradition, everyone starts running around and shouting about aliens in about five minutes flat, and that, too, is beautiful. I love this about Doctor Who – the idea that the universe is greater than we know, and that most people are excited to find that out! It happens here right on schedule and I was glad to see it.

Then as it turns out, even the aliens – the Thijarians – have the same breath-catching quality as the music and the setting. They are extremely scary pointy aliens with impressive helmets and terrifying voices, and according to the Doctor they used to be assassins. But in a gorgeous, poignant, turn-it-on-its-head development, they are no longer assassins – they are witnesses. They seek the unacknowledged dead; they bear witness to those alone.

What a beautiful idea, right? What a beautiful show this is, and this episode is in keeping with some of its very earliest episodes, where the Doctor and companions went to Earth’s history just to see it. “Black Orchid”, the fifth Doctor story with Peter Davidson, was the last “true” historical — i.e., a Doctor Who episode with time travel but no other science fiction element — and, really, that was an anomaly given that there had been barely any since William Hartnell. But nevertheless, I think this episode and “Rosa”, a couple of weeks ago, are perilously and wonderfully close to true historicals. The alien time-traveller in “Rosa” gets dispatched by Ryan a significant amount of time before the episode ends. He’s not really important. Here, the Thijarians are self-confessed witnesses. They’re not here to change history.

And neither is the Doctor. She, and her companions, are also witnesses. Thanks to the Thijarians, they know that Prem is going to die today whatever happens and that it will be only one instance in a history of unalterable violence.  Yaz, in particular, can’t change a thing about this day: for her to be born, her nanni’s life must remain undisturbed in its course.

So – on to the wedding, which must itself be witnessed. In my list of beautiful things about this episode, the chief is this: the Doctor has her mehndhi done. By dim light, the night before a wedding. So much, in this quiet little detail! It’s something my people do. It’s something women do. It’s hard to tell you how weighty this is, without telling you the sort of things white children told me, when I went to school with mehndhi left on my hands.

Onwards. In the morning, the Doctor presides over the wedding, conducted with Hindu and Muslim tradition intertwined. It’s beautiful, still, and now elegiac; love isn’t going to conquer all but love reigns just for a day. After that, the story unfolds as it must. Prem’s own brother betrays him; he is shot by his own people as the Doctor and her companions hurry away. The Thijarians bear witness to what they call the unacknowledged dead, and that’s the end of the story. Sic transit gloria mundi, as they say: thus passes the glory of the old world.

Speaking of the white British, let’s talk about Graham. Why Graham? Well, if I talk about the Doctor, people are going to tell me that she’s actually an alien from outer space. Ryan is another story, comes from another story: also about colonisation, but for another time. So let’s keep it simple and start with Graham. “All the way from England,” he says, proudly, explaining what he and Ryan are doing at this wedding.

Prem claps him on the back and says, “Might want to keep that to yourself right now.”

At that point he’s a bit too busy to get into it, but later, he says this:

“I don’t like this. Traipsing through the forests alongside the British, looking for the enemy. I’ve done enough of that. Although maybe you’re my enemy now, for the mess you’ve just made of my country. Carving it up slapdash, in six weeks. Going to run off home now, are you?”

What does this mean? It means, in brief, that the British have been in India now for nearly two hundred years. It means that they have taken its people, its resources, its culture, for their own. They have fought two world wars with its soldiers. They have broken the continuity of its history. They have executed its independence fighters, exhausted its coffers, and they are leaving now having ceded dominion over something that was never theirs. As Prem says, it’s a goddamn mess.

That’s not Graham’s fault, I hear you cry! He’s just a modern British man and it’s nothing to do with him, which is true; in the same way as Umbreen, a young woman in 1947, about to be married, is nothing to do with Yaz in Sheffield, seventy years later. What is missing from this reverent, dusty stillness, this ethereal evocation of a long-past time, is responsibility. It isn’t that Indians got up one morning and began shooting each other. The Thijarians may wish to acknowledge the minor dead, but Prem’s death is not minor. It’s not a spontaneous event. For Graham’s sake, and the Doctor’s, and for the white viewers’, we gloss over this: a loving, good Indian man is dead because the British took his country as a prize and carved it up like meat. Prem’s body is the body politic.

And what is the new body politic, anyway? What is the glory of the old world that passes? It might be peaceful, in the fields before the new border is being drawn, but peace is not sufficient; peace is not justice. “Demons of the Punjab” uses the word “Partition” half a dozen times and the word “independence” exactly none. By the time the Doctor arrives, India and Pakistan are already independent – they have been independent for two days – but you wouldn’t know it. You wouldn’t know what the British have done and what the Indians – at great cost, as a consequence of sacrifice and pain and yes, violence – have undone. You wouldn’t know what has already been fought and lost here.

But of course, cries the unhappy white British reader at this point, we knew that anyway. We knew that this happens against the background of Indian independence!

In “An Unearthly Child,” the first Doctor Who serial from 1963, the Doctor attempts to kill a man with a rock. It’s a jolt, for the modern viewer. Here’s a jolt just like it. In response to what Prem says above, about the carving up of his land, the Doctor replies: “I’ll make a note of your thoughts and pass them on to Mountbatten if I ever bump into him again.”

Cute. The Doctor denies responsibility. It’s not her fault, either! She’s an alien from outer space. No. It’s no one’s fault.

After all – it’s ancient history, right. It was a whole seventy-one years ago. And I’m sure, by the way, that Vinay Patel is fully aware of that history. He’s written something beautiful here, something tender amidst despair. But he gave the Doctor that jolt of dialogue; he gave Prem a battlefield in Singapore, and an unworthy death. For me, it’s a valuable, precious episode of a television programme I love, and a stellar use of the conventions of the genre.

But please: watch this in discomfort. In elegy, no veritas. The history of the British in India is a history of violence for which ours is not the sole responsibility. Perhaps you learned about Partition for the first time last Sunday at 6.30pm, but it is intimately within the living memory of 1.5 billion people. My grandfather left home in 1947 and visited in 2010 but there is no going back. Not ever. It’s your fault.