A few weeks ago, the Environment Agency released the first tranche of their LIDAR survey data. This covers (most of) England, at varying resolution from 2m to 25cm, made via LIDAR airborne survey.

It’s great fun. After a bit of back-and-forth (and hastily figuring out how to use QGIS), here’s two rendered images I made of Durham, one with buildings and one without, now on Commons: 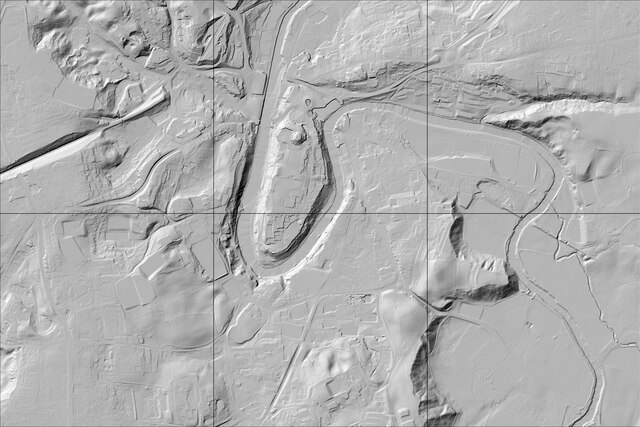 The first is shown with buildings, the second without. Both are at 1m resolution, the best currently available for the area. Note in particular the very striking embankment and cutting for the railway viaduct (top left). These look like they could be very useful things to produce for Commons, especially since it’s – effectively – very recent, openly licensed, aerial imagery…

Generating these was, on the whole, fairly easy. First, install QGIS (simplicity itself on a linux machine, probably not too much hassle elsewhere). Then, go to the main data page and find the area you’re interested in. It’s arranged on an Ordnance Survey grid – click anywhere on the map to select a grid square. Major grid squares (Durham is NZ24) are 10km by 10km, and all data will be downloaded in a zip file containing tiles for that particular region.

Let’s say we want to try Cambridge. The TL45 square neatly cuts off North Cambridge but most of the city is there. If we look at the bottom part of the screen, it offers “Digital Terrain Model” at 2m and 1m resolution, and “Digital Surface Model” likewise. The DTM is the version just showing the terrain (no buildings, trees, etc) while the DSM has all the surface features included. Let’s try the DSM, as Cambridge is not exactly mountainous. The “on/off” slider will show exactly what the DSM covers in this area, though in Cambridge it’s more or less “everything”.

While this is downloading, let’s pick our target area. Zooming in a little further will show thinner blue lines and occasional superimposed blue digits; these define the smaller squares, 1 km by 1 km. For those who don’t remember learning to read OS maps, the number on the left and the number on the bottom, taken together, define the square. So the sector containing all the colleges along the river (a dense clump of black-outlined buildings) is TL4458.

Now your zip file has downloaded, drop all the files into a directory somewhere. Note that they’re all named something like tl4356_DSM_1m.asc. Unsurprisingly, this means the 1m DSM data for square TL4356.

Fire up QGIS, go to Layer > Add raster layer, and select your tile – in this case, TL4458. You’ll get a crude-looking monochrome image, immediately recognisable by a broken white line running down the middle. This is the Cam. If you’re seeing this, great, everything’s working so far. (This step is very helpful to check you are looking at the right area)

Now, let’s make the image. Project > New to blank everything (no need to save). Then Raster > Analysis > DEM (terrain models). In the first box, select your chosen input file. In the next box, the output filename – with a .tif suffix. (Caution, linux users: make sure to enter or select a path here, otherwise it seems to default to home). Leave everything else as default – all unticked and mode: hillshade. Click OK, and a few seconds later it’ll give a completed message; cancel out of the dialogue box at this point. It’ll be displaying something like this: 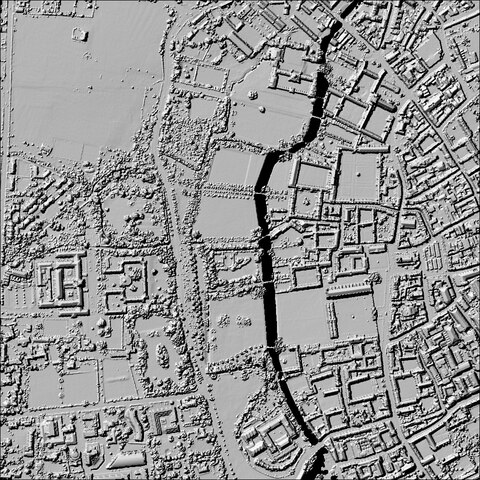 Congratulations! Your first LIDAR rendering. You can quit out of QGIS (you can close without saving, your converted file is saved already) and open this up as a normal TIFF file now; it’ll be about 1MB and cover an area 1km by 1km. If you look closely, you can see some surprisingly subtle details despite the low resolution – the low walls outside Kings College, for example, or cars on the Queen’s Road – Madingley Road roundabout by the top left.

Rendering multiple squares is a little trickier. Let’s try doing Barton, which conveniently fits into two squares – TL4055 and TL4155. Open QGIS up, and render TL4055 as above, through Raster > Analysis > DEM (terrain models). Then, with the dialogue window still open, select TL4155 (and a new output filename) and run it again. Do this for as many files as you need.

After all the tiles are prepared, clear the screen by starting a new project (again, no need to save) and go to Raster > Miscellaneous > Merge. In “Input files”, select the two exports you’ve just done. In “Output file”, pick a suitable filename (again ending in .tif). Hit OK, let it process, then close the dialog. You can again close QGIS without saving, as the export’s complete.

The rendering system embeds coordinates in the files, which means that when they’re assembled and merged they’ll automatically slot together in the correct position and orientation – no need to manually tile them. The result should look like this: 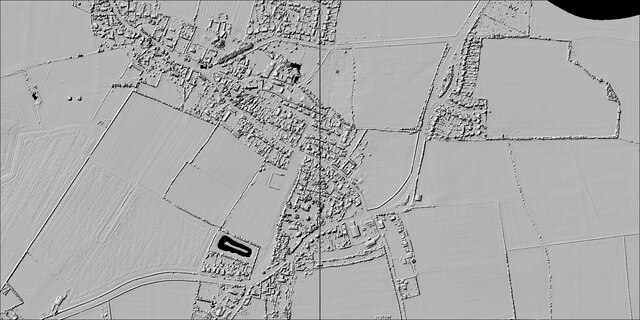 The odd black bit in the top right is the edge of the flight track – there’s not quite comprehensive coverage. This is a mainly agricultural area, and you can see field markings – some quite detailed, and a few bits on the bottom of the right-hand tile that might be traces of old buildings.

So… go forth! Make LIDAR images! See what you can spot…

Richard Symonds (who started me down this rabbit-hole) points out this very useful post, which explains how to do the rendering and merging via the command line. Let’s try the entire Durham area; 88 files in NZ24, all dumped into a single directory –

In order, that a) runs the hillshade program on each individual source file ; b) assembles them into a single giant image file; c) removes the intermediate images (optional, but may as well tidy up). The -compute_edges flag helpfully removes the thin black lines between sectors – I should have turned it on in the earlier sections!

Here’s a nice little piece of software: dynamic travel-time maps for the Tube, redrawn to show the system, adjusted for time, splayed out around your preferred location.

So, for example, we can see that Brixton, Ealing and Hampstead are all equidistant (20min) from Paddington. Clicking around a little also tells us the longest single journey, not counting interchange times – Upminster to Chesham, 108 minutes – and the temporal centre of the network, which is approximately in the Oxford Circus-Baker Street area, 55 minutes from the edges.