One of the projects I’ve been meaning to get around to for a while is scanning and dating a boxful of old cabinet photographs and postcards produced by Lee of Portrush in the late nineteenth and early twentieth century.

At least five members and three generations of the Lee family worked as professional photographers in this small Northern Irish town – the last of them was my grandfather, William Lee, who carried the business on into the 1970s. Their later output doesn’t turn up much – I don’t think I’ve run across anything post-1920s – but a steady trickle of their older photographs appear on ebay and on family history sites. They produced a range of monochrome and coloured postcards of Portrush and the surrounding area, did a good trade in portrait photographs, and at one point ended up proprietors of (both temperance and non-temperance) hotels. Briefly, one brother decamped to South Africa (before deciding to come home again) and they proudly announced “Portrush, Coleraine, and Cape Town” – a combination rarely encountered. A more unusual line of work, however, was that they had a studio at the Giant’s Causeway.

The Causeway is the only World Heritage Site in Northern Ireland, and was as popular a tourist attraction then as now. A narrow-gauge electric tramline was built out from Portrush to Bushmills and then the Causeway in the 1880s, bringing in a sharp increase in visitors. And – because the Victorians were more or less the same people as we are now – they decided there was no better way to respond to a wonder of the natural world than to have your photograph taken while standing on it, so that you can show it to all your friends. Granted, you had to pay someone to take the photo, sit still with a rictus grin, then wait for them to faff around with wet plates and developer; not quite an iPhone selfie, but the spirit is the same even if the subjects were wearing crinolines. There is nothing new in this world.

The Lees responded cheerfully to this, and in addition to the profitable postcard trade, made a great deal of money by taking photographs of tourists up from Belfast or Dublin, or even further afield. (They then lost it again over the years; Portrush was not a great place for long-term investment once holidays to the Mediterranean became popular.)

Many of these are sat in shoeboxes; some turn up occasionally on eBay, where I buy them if they’re a few pounds. It’s a nice thing to have, since so little else survives of the business. One problem is that very few are clearly dated, and as all parts of the family seem to have used “Lees Studio”, or a variant, it’s not easy to put them in order, or to give a historical context. For the people who have these as genealogical artefacts, this is something of a problem – ideally, we’d be able to say that this particular card style was early, 1880-1890, that address was later, etc., to help give some clues as to when it was taken.

Fast forward a few years. Last November, I had an email from John Kavanaugh, who’d found a Lee photograph of his great-great-grandfather (John Kavanagh, 1822-1904), and managed to recreate the scene on a visit to the Causeway: 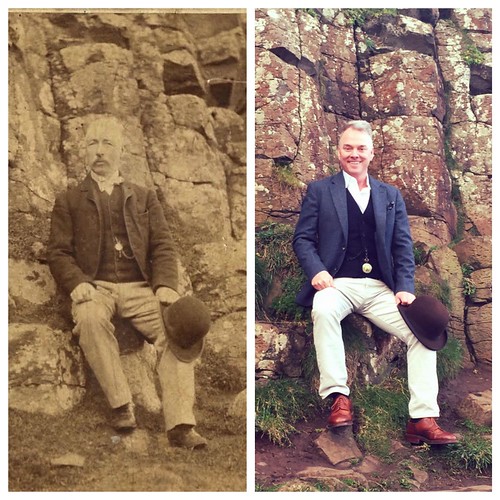 It’s quite striking how similar the two are. The stone the elder John was sat on has now crumbled, fallen, or been moved, but the rock formations behind him are unchanged. The original photo is dated c. 1895, so this covers a hundred and twenty years and five generations.

So, taking this as a good impetus to get around to the problem, I borrowed a scanner yesterday and set to. Fifty-odd photographs later, I’ve updated the collection on flickr, and over the next few posts I’ll try and draw together some notes on how to date them. 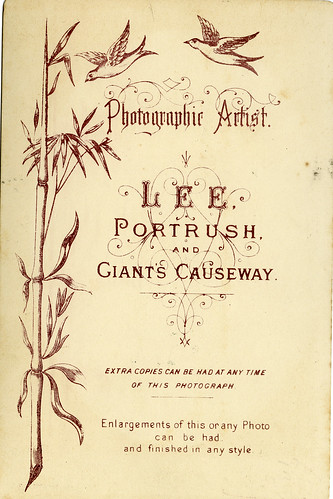 (Addendum: all comments below will be replied to by email if possible! I am always delighted to see new photographs from the Lees, and will see what I can do to help you date them. Many thanks for all the comments, and please do get in touch.)

11 thoughts on “Lee of Portrush: an introduction”